In this post about ONE OK ROCK (OOR), I want to express how I felt, as a fan of almost six years, when OOR gained mega popularity recently after being featured in a movie adapted from a famous manga/anime. This is speaking from my personal experience and observation, so it is possible that you’ve been through something different. And please don’t take any of this as hard facts, they are my personal opinion. The only hard fact I can assure you here is that I’ve been loving OOR since I’ve heard of them in 2008.


My sister showed me this PV: my first ONE OK ROCK song. 必然メーカー(Hitsuzen Maker) from BEAM OF LIGHT (2008) Back then, we called Taka ‘The Kid’. Take a listen while reading this post :D

Lately I’ve been talking about ONE OK ROCK a lot. They are all around the US this year, so I’m super excited and I just can’t help it. I went to see them live in LA last month. That definitely was not enough. The show left me feeling incomplete, even though I thought that after seeing them at least once, my life would be completed. But I was wrong. It sure was a new beginning for me.

Speaking of new beginnings, the ONE OK ROCK after ‘The Beginning’ sure is a new starting line for them. They really, truly gained a lot of eyeballs and ears after that. It is all thanks to the internationally famous classic work of the Rurouni Kenshin manga/anime. It is true that Rurouni Kenshin is the reason, no one can deny it. I’m not saying The Beginning isn’t good, The Beginning is a great song, but it isn’t OOR’s only good song. Sure, a lot of people found them out from this song, but if the rest of their songs aren’t good, I’m sure nobody would care. This just means OOR has been good all along. They just needed some more exposure. Which they received a lot from the film, along with the ripple effect of being the talk of the web, and gained a huge amount of Japanese and international fans.

OOR was already getting big in Japan for a while. Who knows what they had planned in 2009 before Alex messed up. Anyway, they had their BUDOKAN debut in 2010 and already got to Yokohama Arena in 2011. Even so, it still seemed like nobody knew them. I know a lot of J-pop/J-Rock fans out there (meaning non-Japanese who listens to Japanese music), and I can tell you that many of them didn’t know OOR. Japanese students I met at school over the past years, never I found anyone who knew them. Japanese people I’ve met around said they’ve never heard of them. There were online international fan communities, but that doesn’t count as a true international fan base, since being online has the great ability to gather all outliers to become one. I’ve never met people in person that knows them, but nowadays any Japanese music listener I meet around here now knows of OOR. In other words, OOR just wasn’t mainstream or widely known back then.

I know another OOR fan reading this may argue with me that this isn’t true, or maybe they’ll understand exactly what I’m talking about (and about to talk about below). A good solid proof is the availability of Romanized lyrics, covers on YouTube, and the availability of guitar tabs online. Covers I’ve seen of OOR from a long time ago, are a few rock band covers. Now you can find almost many Japanese (or non-Japanese) YouTube musician/singer covering The Beginning. And then about the lyrics and tabs: There are OOR’s romanized lyrics everywhere now on the web, along with a handful of guitar tabs/full scores on ultimate-guitar. I am certain these were not there before, because otherwise I wouldn’t be struggling on figuring out their music on my own all these years. I have to do Japanese searches for lyrics, and even then there weren’t as many chords or lyrics available.

Now maybe you’re wondering why I am saying all this. It is only natural for a band to become well-known after a mega exposure. So here is my main point after all that build up: When The Beginning’s PV was released on OOR’s official YouTube Channel, they got an explosion of views. And reading the comments just made me so ANGRY. I see a lot of “KENSHIN!!!” “SAMURAI X” comments, and “The vocalist is so cute” kind of comments. I hated that OOR was secondary here. I hated that their appearance was being judged. I hated that the comments were not about OOR’s music. I’m not saying all those people are doing anything wrong, and I’m aware that this is only natural. Even though there were barely any negative comments at all I still felt upset. I thought, “WHY NOW?! THEY’VE BEEN RIGHT HERE ALL ALONG. THEY’VE BEEN AWESOME SINCE FOREVER!”

If you still can’t relate to how I feel, I’ll try applying this to another scenario:

There’s a restaurant you’ve been going to for a long while. You love the place for the great people, food and service. Sometimes it gets very busy, and they have a lot of usual’s. You tell people how great this place is but it was never a big deal to anyone. One day, some famous celebrity talked about this restaurant on TV. Then after that incident, the restaurant has been packed, no longer free of long queues. They barely ever have idle time anymore, and on yelp suddenly they are filled up with reviews. Even worse, your friends who may have dissed or showed no interest in the place back then, come up to you to tell you how awesome the restaurant is. To you, you’re thinking to yourself, “Okay, my voice doesn’t count, just wait ‘til some celebrity on TV or random people on Yelp tell you what’s great and what’s not…” Of course you’re happy the restaurant gained so much business they deserved. But what is this feeling of annoyance?

This scenario is not exactly the same as people discovering OOR, but the feeling is similar. You know what I mean?

This is the reality we must face: The talented needs to be discovered. There are a lot of talented people out there, but without the effort of putting themselves out there, nobody will ever find them. Without spreading the word, without great support, they won’t make it. OOR has been great since they started this band, and they still are just as great. They just needed more exposure. 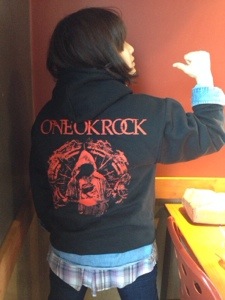 ONE OK ROCK Hoodie purchased from SideStep App. Sadly this one I borrowed from my sister Dx

I’m not upset anymore, but I did take some time to get over it. I was also happy about it all since the beginning of it, because once they started announcing shows all over the globe, I knew they’d come to the US soon enough. I was certain that they wouldn’t skip the US, so I just sat back and calmly watch the, “Why won’t they come to the States?” comments go by. And then before I realize it, they are already coming to Washington with Vans Warped Tour June 2014 <-now THAT exceeded my expectations. (Took them long enough though, I’ve been waiting for years and years, why?why?why?arghh!)

If you relate to this or have anything say about this please feel free to comment. I don’t bite…:)

2 thoughts on “ONE OK ROCK and The Beginning and Me”